The International Youth day Fiesta was jointly organized by the University of Hyderabad (UoH), Students’ Union and a city based organization Surajya Movement, at the DST auditorium of the university on 11 August 2014. The four- hour event brought together an impressive gathering of students of the university. There were dignitaries and media personnel from the city as well.

The program began with an exciting video-song of late Michael Jackson, carrying deeply moving vignettes of a world torn apart by the scourge of war and conflicts. The note of peace upheld by the children of the world at the end of the song sequence, with weapons of war in the background, brought cheer to the gathering of students present. With eyes moist, a large number of those assembled held candles of hope in the darkened auditorium of the university.

Inaugurating the program Professor Sachidananda Mohanty, former Head, Department of English and former Chair, NAAC Steering Committee of the university, said that the time had come for the youth of India to stake their rightful place in participating in the affairs of the country in an effective manner. This would be possible, he said, by developing their critical faculties as well as the power of imaginative thinking. Decrying the practice of rote learning that was the bane of the country, he urged the students’ community to utilize the rare opportunities during their study career to prepare themselves as citizens of the 21st Century by decolonizing their minds.

Dr S.George, Child Protection Specialist of the UNICEF Hyderabad, drew example from his own life to suggest that students were ideally placed to empathize with the needs of children in society. In the context of the various conflicts prevalent across the world, it is imperative, he argued, that we devote all our energies for the betterment of children. We need to come out of the poverty curtain for the future of our next generation.

The main speech was delivered by Dr Jayaparakash Narayan, General Secretary of Foundation for Democratic Reforms. Drawing attention of the student gathering to the pitiable condition of education and health care etc in the country, Dr Narayan said that time was running out for India. Countries like China had already overtaken us, and in near future, other nations are likely to respond more effectively to the economic and educational challenges posed at the international level. India lacks many of the basic minerals and resources, but is rich in human resources. Only quality education can free India from the clutches of its poverty and backwardness, he said. Dr Narayan answered the questions posed by students present.

Professor Prakash Babu, Dean of Student’s Welfare, expressed satisfaction with the proceedings. He thanked Dr Narayan profusely for being so inspirational. Ms Sirisha, President of the Students’ Union welcomed the gathering. She and Dr Manohari of Surajyam, thanked the audience for the success of the meeting. Finally, Dr Narayan gave away framed photographs dealing with the theme of education, to the distinguished speakers who addressed the gathering. 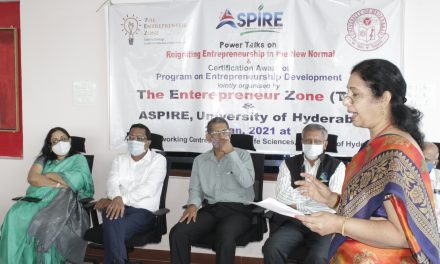 Reigniting Entrepreneurship in the New Normal