Two theatre productions by students from Department of Theatre Arts, S.N. School, University of Hyderabad have been invited to be staged at two of the International Theatre Festivals in New Delhi. The play ‘Reflections’ devised and directed by Mr. Noushad. M will be featured in the International Festival of Theatre Institutes (IFTI) on January 7th, 2012. The performance of ‘Reflections’ is evolved from the acting classes conducted by Mr. Noushad through the exploratory method with the students on the concept of body in space.

IFTI is an initiative of UNESCO’s International Theatre Institute (ITI) in collaboration with National School of Drama, New Delhi scheduled from 4thto 9th January, 2012 in which twelve premier theatre institutes from across the world are participating with productions. In the festival all international schools will conduct workshops for all participants to provide a glimpse into each school’s training methodologies for other participants.

‘Romeo, Juliet and Security Man’ a site specific performance based on Shakespeare’s play ‘Romeo and Juliet’, directed by Prof Jane Collins and Mr. Deepan Sivaraman (Wimbledon College of Arts, London) is invited for the Bharat Ranga Mahotsav, annual international theatre festival organized by National School of Drama  to perform on January 14th, 2012 in New Delhi.  The performance is an outcome of a fifteen days’ workshop on scenography conducted for the Masters students in Theatre Arts in the month of September 2011.

UoH among Best Universities in India 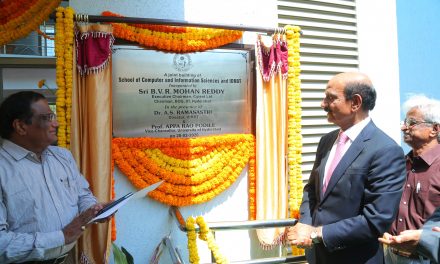 Kshemendra’s Views on Aptness in Art