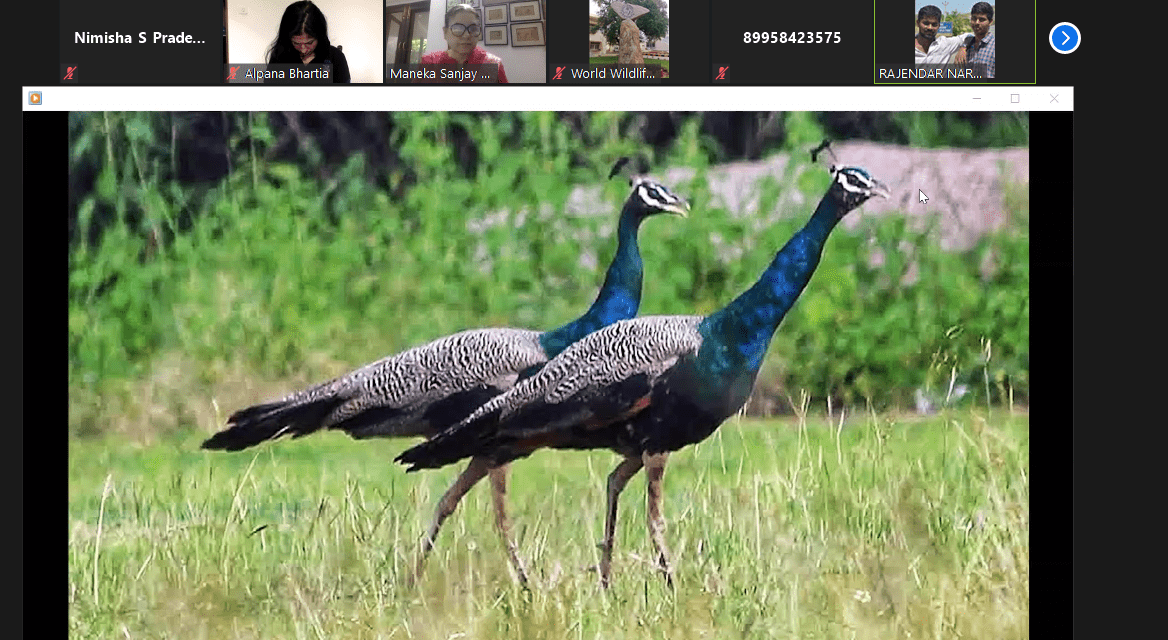 On the occasion of world wildlife day, the University of Hyderabad organized the World Green Army Conference. The theme for this year’s wildlife day celebrations was ‘Forests and Livelihoods: Sustaining People and Planet.’ Smt. Maneka Gandhi, MP of Lok Sabha and founder of People for Animals was the Chief Guest of the event.

Smt. Maneka Gandhi’s interacted virtually and her talk majorly focused on the wildlife trade. In this regard, she urged for more monitoring. She emphasized the importance of incentivizing the informers who call upon the authorities about offenses on wildlife. She said academic institutions should also focus on educating and training the people on wildlife sciences, improving the healthcare and anti-poaching strategies of the wild animals. Talking about one of her dreams, she said that she wished India had a good university for studying veterinary science and a degree exclusively for animal welfare. She said “We must encourage everyone to take responsibility for wildlife protection as we have only 15% left.” she said.

Emphasizing the need to be sensitive to urban wildlife Alpana Bharatia, founder trustee of People for Animals, Bangalore said, “Focus on crows, squirrels, snakes etc.” Emphasized to create awareness at individual level about the wildlife habitat. Educating the people about the importance of each species such as bees and bat can pollinate huge number of flowers which in turn give fruits. Every citizen should be vigilant about wildlife trade in their respective locations. Encouraging the plantation drives will improve the green cover.

Shri. A. Shankaran, IFS, DCF Wildlife, Telangana State, stressed upon the importance of reducing the human wildlife conflict and strategies to counter poaching activities. Every citizen has the responsibility of maintaining the ecological balance on the earth and maintaining valuable resources. He assured that the government of India has stopped the declaration of wild animals like vermin, this inturn will improve the increasing wildlife species.

Ex-Indian Navy Pilot, Shri Sidharth Venkataramani has emphasized the importance of using tools in wildlife conservation such as Drones in anti-poaching, wildlife surveillance and geographic mapping. This mechanism will address timeline ecological issues and monitoring, mapping land and marine issues.

The event witnessed a huge footfall consisting of students and staff from the university. The evening was kick-started by an enthralling live snake show conducted by Shri Varun, member of Friends of Snakes Society(FOSS). He demonstrated different species of snakes, their habitats and their food habits. The show was followed by an interactive and informative session by Mr. Varun who briefed the audience about the safety measures that need to be taken in case of snake bites.

Mr. Rohit Bondugula, a Ph.D. scholar at University of Hyderabad, Founder of World Green Army and also Telangana State Co-convenor for Students for Development initiated and was the main organizer for the event. As a wildlife enthusiast, Rohit has been instrumental in conserving the biodiversity of the university space. And he has played a crucial role in safeguarding the university land from illegal encroachments.

Smt Vasanthi Vadi, People for Animals(PFA) motivated the students to carry on with the evening’s programmes with an energetic session with the audience. She emphatically raised the need for young minds to work towards the protection of the planet. Additionally, she encouraged the students to volunteer for ‘People for Animals’ to further the cause of conversation of biodiversity.

The main attraction of the event was the presence of Tollywood singer, Shri Ram Miryala an Environmental Activist accompanied by Krishna Chaitanya (Mama Singh). Through his songs, the singer voiced the dire situation of the planet. While addressing the enthralled crowd, Ram stressed the need to conserve the biodiversity of the planet. He concluded by saying, “the planet doesn’t need us, we need the planet.”

The campus wildlife photography by Dr Ravi JIllapalli founder of Wild Lens and Raghu Ghanapuram exhibition has attracted the audiences with their tremendous photography skills exhibiting the diversity of the campus.

Shri Sujeeth from Turtle Survival Alliance (TSA) created awareness about the turtles lifestyle and addressed issues faced by them.

The program concluded with a Q/A session with Mr. Pradeep Nair founder of Animal Warriors Conservative Society. He enthusiastically answered a few questions from the audience and suggested ways to protect animals in an urban set-up which most of the audience are part of.

The organizing students team thank Dr. Shree Deepa, department of English for their constant encouragement and support in organizing this conference. She has kindly agreed for moderating the entire session with great enthusiasm. During the pandemic she was instrumental in feed the stray program and also addressed various issues of wildlife conservation in University of Hyderabad.

Prof RS Sarraju has been actively working on various biodiversity conservation programs like plantation drives, feed the wildlife program and clean-up drives. Through his works and talks he ignited the spirit of conservation in the young minds.

Dr. M.N Rajesh from the School of Social Sciences inspired the campus community with his “feed the stray” and stood as a role model for the upcoming nature lovers.

Ms. Sreeja Bachala, founder Sthira Foundation said “We have been noticing a major imbalance in our ecological structure, Our wildlife that provides different natural process processes nature is been destroyed through many ways like land encroachments, deforestation and inhumane behavior towards wildlife. Many species are under the IUCN red data list.”

We humans have been entering into their space and destroyed their habitat and also disturbed the entire flora and fauna by letting go of our native species. We should realize at least now and start conserving our wildlife.

It is important to protect the endangered species along with their natural habitat for our future generation.

The young environmentalist of University of Hyderabad Ms. Sreeja, being the founder member of World Green Army has initiated the “I Pledge to do so…” campaign.

Special thanks to Prof Appa Rao Podile, Vice-Chancellor of University of Hyderabad for encouraging the wildlife conservation and plantation drives.

-With inputs from Nimisha S Pradeep, Balakrishna of Department of Communication and Rohit Bondugula, Ph.D. scholar at UoHP