“It’s time to talk about the significance of remembering, to remember those who have left behind a legacy for us, their intellectual journeys, and what they have produced.” Noted legal scholar Dr Usha Ramanathan, speaking at the Alladi Memorial Lecture, exhorted the audience to go beyond the “politics of forgetting” and to engage more deeply with the processes of power that have stilled the voices of the marginalised in the country.

The Alladi Memorial Lecture on Law, no-law and lawlessness was organized by the Alladi Memorial Trust and the University’s Centre for Human Rights on March 17. This year, the lecture was dedicated to the memory of the eminent Jurist Mr. V.R. Krishna Iyer who passed away on December 04, 2014. Alladi Kuppuswami, the founder of the trust who was born and died in March, was a great admirer of Mr. V.R. Krishna Iyer.

The event was chaired by Justice B.P. Jeevan Reddy, a distinguished judge of Supreme Court of India and the Former Chairperson of Law Commission.

In her sharply focused yet broadly relevant talk, Dr Ramanathan suggested that we all become familiar with the Constitution of India because if we are going to invent the world then we need to go back and see how the world was invented for us by some of these “incredible people”. She said,“Dr. Krishna Iyer and his colleagues changed the way one should look at Law and Constitution. They told us that the constitution has been made to protect the weak against the strong. It has not been made to protect the strength of the strong but it is about the limits of power of the state over the people,” she said. “The responsibility that the courts have to take is to make sure that it protects the voiceless, illiterate and ignorant. The constitutional functionaries have to reach out people who are weak,” she added.

In the Indian context, law is seen as an instrument which is used to achieve not just certain specific purposes relating to individual and social justice, but also to mediate the power relationships between various people. Over the years, the language of the courts has been derived from experiences with, without and beyond law to speak of poverty, impoverishment, vulnerability, marginalization, invisibilising, dispensability, legality, legitimacy, and encroachment.

She emphasized the need to pay attention to three contexts which challenge legal thinking: land, the death penalty (life) and surveillance (liberty and freedom). These areas help draw out the relationship between the state and the citizen.

“Somewhere we have not [clearly articulated] the relationship between the law, constitution, state and the citizen. For some of the answers that we seek about communal violence, hate speech, safeguarding free speech and safeguarding minorities, we need to know how to think. That process has been lost and needs to be restarted because we have abdicated too much of our role as resident citizens to a state that increasingly believes itself to be above and beyond the law,” she concludes.

Prof. Haragopal, former director of the Centre and retired professor of political science, introduced the speaker and provided a brief overview of the Centre for Human Rights.

The Alladi Memorial Trust was founded in 1983 by Alladi Kuppuswami to commemorate the birth centenary of his father Alladi Krishnaswamy Iyer. It aimed to help poor litigants, lawyers and students of law and for helping in the administration of justice. Alladi Memorial Lectures are delivered every year on issues broadly related to democratic rights, citizenship and the Indian Constitution 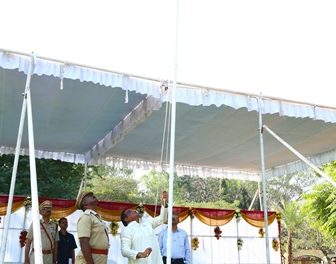 Psychological Counseling no more looked as a stigma today