The Department of Communication, Sarojini Naidu School of Arts and Communication (UoH), conducted a screening of the documentary film Dirt and an interaction with the filmmaker, Meghna Haldar, on March 11 at the School of Humanities.

Meghna Haldar, an S.N. School alumnus from the batch of 1997, expressed her delight at being able to return to the department and credited it for her success. She thanked Professor Vinod Pavarala and Professor B.P. Sanjay for their guidance when she was a young student at the University. She interacted with M.A. students prior to the screening and advised them to make good use of the resources available. She spoke of her own experiences as an immigrant that inspired her to make this documentary and encouraged the audience to question existing practices and dynamics.

Meghana Haldar is an Indian-Canadian writer/filmmaker based in North Vancouver. Her feature documentary Dirt garnered three Leos in 2009 and the Best Documentary Award at the Female Eye Festival. In 2009, she presented “Dirt: A Social Mirror” at the Global Conference for Multiculturalism, Conflict and Belonging at University of Oxford. In her hometown, she has coordinated the well-regarded Justice Forum for DOXA Documentary Festival, and has been a juror and mentor for several Canadian arts organizations on the local, provincial and federal level. In 2014, she was nominated for the Remarkable Women series for the City of Vancouver. Meghana Haldar joined Emily Carr University of Art and Design as a session faculty in 2015.

Her feature documentary is an exploration of the concept of dirt and impurity. From the slums of Kolkata to Vancouver’s Downtown Eastside to a barbeque joint in Central Texas, Dirt explores the hypocrisy, webs of meaning and feeling attached to this word. An off-campus screening was done at LaMakaan on March 12. 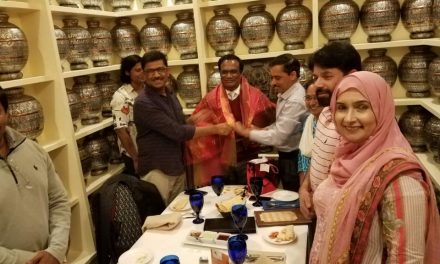