Hyderabad-based Kiranmayee Madupu has come a long way by sheer dint of dedication, diligence and above all devotion to dance. Though labelled as an up-and-coming artiste, she displayed a maturity beyond her experience while performing in VIRASAT 2017, a cultural event organised by the UoH sub-chapter of University of Hyderabad (UoH) along with SPIC MACAY. Her performance is in itself a testimonial to her potential as an artiste of calibre; to watch out for in the future on the Bharatanatyam scene. Virasat 2017 includes classical dance, classical music, cinema classics, craft workshop, classical dance workshop, folk dances and a heritage walk.

Kiranmayee Madupu and her very talented team of artists consisting of Shri Chandrarao Kanakkam, a renowned vocalist and violinist, Shri Raghunandan Chakravarthy, passionate and skilled Mridangam and Nattuvangam musician, Shri Srinivas Karra, a grade-A Mridangam artist who is also equally trained at Nattuvangam, Shri. Dinakar Ramaraju, a reputed violinist. Pro Vice Chancellor, Prof. Vipin Srivastava was the Chief Guest and he called upon the student community to take part in cultural and extracurricular activities on the campus as it provides various avenues for the same. Dr. Zahidul Haq, Cultural Co-ordinator and faculty in the Department of Urdu was the Guest of honour. For an hour and thirty minutes, yesterday a spell was cast on the auditorium by the magical and magnificent performance of Madupu’s team. The artist along with her team performed four dance recital pieces; each piece had an intriguing storyline which Madupu beautifully depicted in her choreography. The danseuse, a disciple of veteran guru Hemamalini Arni, has the audience mesmerised with her graceful movements. She had the viewers’ gaze in admiration at her agile darus coupled with emotive sancharis and varied hastha mudras to depict the refrain time and again. She was able to take up the entire stage with natural grace and meaningful footwork rather than just run around to cover space.

With expressive interpretation and innate grace, Kiranmayee brings a fresh yet profound dimension to her dance. She has extensively performed in India and abroad including London, Birmingham, Yorkshire, Lancashire, Colombo and Delhi, Mumbai, Bangalore, Hyderabad, Chennai and many more.

Kiranmayee is an IT Engineer by education and even worked in the reputed multinational company Deloitte as a consultant for 2 years after which she decided to take up Bharatanatyam full time. She is also a vocalist, accomplished painter and a freelance graphic designer. She works for SPICMACAY to promote Indian Classical art amongst underprivileged children. She has also spoken for TEDx talks.

As the very first day of Virasat 2017, 21st February has already set up a great expectation level for the days of Virasat that will follow. The great show was pulled off by the “nishkam” volunteers of UoH subchapter of Spic Macay. They toiled a lot and were of as much importance as the main artist. Starting from coordinating with the artists, arranging for transportation facilities, on-stage and off-stage requirements, stage decorations, snacks- food and beverages, hospitality, management, everything was done by the Spic Macay volunteers.

With such hardworking volunteers, and such talented artists, UoH subchapter of Spic Macay, is sure to conduct more such successful events and it begins with Virasat 2017. 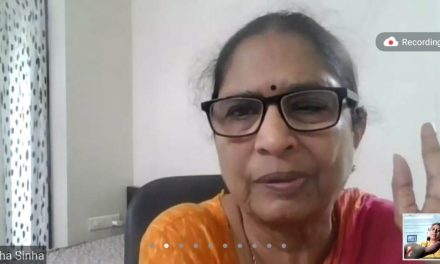 Promoting Inclusion and Educational Opportunity among Disadvantaged Groups in Hyderabad