UoH Staff to be awarded PhD by Osmania University

Dr. Pathuri Sree Venkateswara Rao, presently working as Senior Assistant in Finance & Accounts Department at the University of Hyderabad (UoH) has completed his Ph.D on the titled “The Influence of European Play Wrights on the Telugu Dramatic Literature: A Case Study on Henrik Ibsen & Realism” under the supervision of Prof. G.S. Prasad Reddy, Department of Theatre Arts, Nizam College, Hyderabad.

Dr. Rao after qualifying the NET exam in the year 2009, joined for part-time Ph.D in March 2011 and was awarded the degree in December 2016. He will be receiving the degree in the next convocation later this year. Dr. Rao joined the University on June 7, 1986 as Junior Office Assistant and has worked in Finance & Accounts, External Funding Linkages Section, School of Physics, Personnel Section – I at the University.

Ambedkar, Gandhi and Patel: The Making of India’s Electoral System 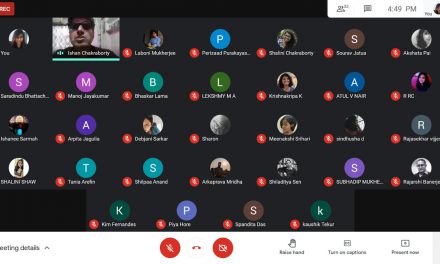 Bricolage II: ‘Rereading the Concepts of Disability and Access through the lens of the Pandemic’