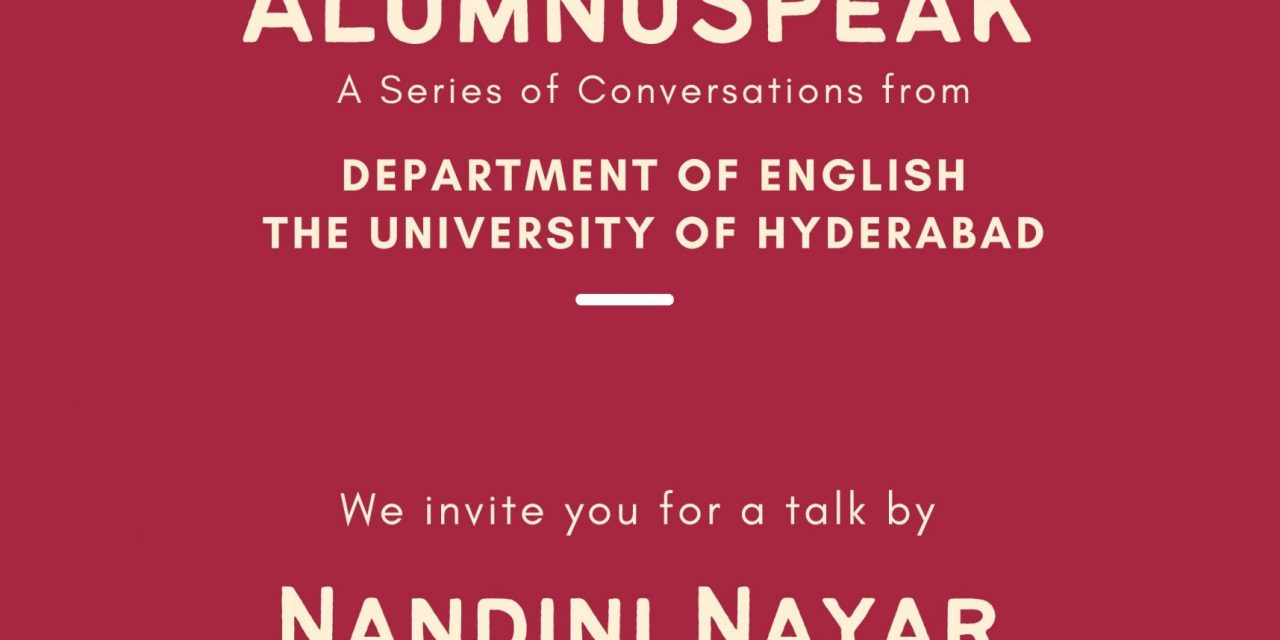 The students, professors, alumni and friends of the English department were in for a treat as Nandini Nayar, prolific children’s author and an alumnus of the Department of English at University of Hyderabad (UoH) joined for the third event of AlumnuSpeak on September 1, 2021. Nandini Nayar was an MA student at the department between 1993 and 1995.

Nandini launched into an animated discussion about the joys and challenges of establishing oneself as a writer of children’s and YA fiction in India today. She recounted her journey from Chennai to the Masters’ programme in English at the University, where she recalls being overwhelmed and excited by the vastness of the space and the freedom and friendships it offered. The several hours spent reading at IGML were fondly spoken of, and she credited the excellent teaching at the department to shaping and informing her writing skills.

Nandini Nayar’s foray into writing, as she reminisced, was at a time when there were very few books in India that catered specifically to Indian children. As a simple example, she cited the lack of commonly used monikers such as “amma” and “appa” in books for children during the time. A short story published in the children’s supplement of a daily newspaper reinforced her belief in the career path she chose to follow, and there has been no looking back since. She soon diversified into picture books and books for older children which were picked up by major publishing houses such as Tulika and the Children’s Book Trust, winning her several awards. She has also worked with major publishers to create content for text books.

During the interaction that followed her talk about her writing journey, Nandini answered a number of questions about the themes, style and reception of her stories. People could not help but notice that food was present in several of her stories, such as in the popular What Shall I Make? and this was attributed to an early research interest in the area that percolated through to her stories. She spoke about how her experiences as a parent gave her access to the whims and likes of children. In responding to different questions about the creation of storyworlds and self-censorship that went into the decision-making process of writing for various age groups, Nandini explained how, when an idea strikes, one immediately knows which age group would understand it the best, and then she sets out to make the story the best version of the idea. Citing an example from her own repertoire of stories, a book which featured an incident of child sexual abuse, Nandini drove home the point that very young children could hardly make anything out of that incident, even though they read it, but older school children reached out to her to share their own stories and to thank her for bringing the serious issue to light.

Social media has made sure that writers of children’s books receive feedback from children through videos or interactions mediated by parents, and this gives writers such as her the much-required motivation to keep writing. Alumni and others from the audience, including a librarian from a children’s library in Hyderabad, spoke of how much their children enjoyed reading Nandini’s books. The writer’s advice to parents was to wait for their child to find the right kind of book to get them into the reading habit: there was no knowing if it would be magic or a book of non-fiction that would intrigue them most. The enthusiasm that lasted throughout was a real testament to Nandini’s Nayar’s opening remarks: that nostalgia was much more than the sharing of anecdotes, it was the evocation of a mood.