Arts and Science are manifestation of beauty and creativity of nature. Prof. Pushpa Mitra Bhargava, eminent scientist and Padma Bhushan awardee, presented seven thesis to show this while delivering a lecture titled “Two Faces of Beauty: Science and Arts”, at the the C R Rao Advanced Institute of Mathematics, Statistics & Computer Science (AIMSCS) located at the University of Hyderabad (UoH) campus.

First thesis: There is inherent beauty in most of structures that the nature gives rise to at all levels of evolution. For example, a snapshot of the galaxy in the universe, honey hive, spider web – are all beautiful.

Fourth thesis: In the process of evolution, human beings are bestowed with higher ability to appreciate beauty and creativity.

Fifth thesis: When human beings create, they create beauty that finds analogy with the nature’s creations.

Sixth thesis: Creativity and beauty are relative in all areas of the science and arts and follow common methodology.

Prof. Bhargava opined that without being challenged to pursue curiosity, one can’t create good science or art. Our constitution specifies development of scientific temperament as a duty; development of aesthetic temper should also be equally recognised constitutionally as a duty.

This lecture was delivered on March 14, 2015 as part of the one day workshop on “Mathematics, Music and Nature”, under Dept. of Science & Technology, Govt. of India (DST) sponsored project on Mathematical Legacy of Ramanujan and its Applications at the AIMSCS. 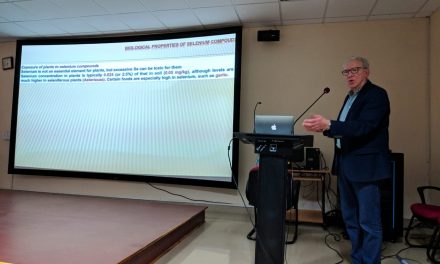