Panel Discussion on CREATING HOPE Under the ALAMBANA series 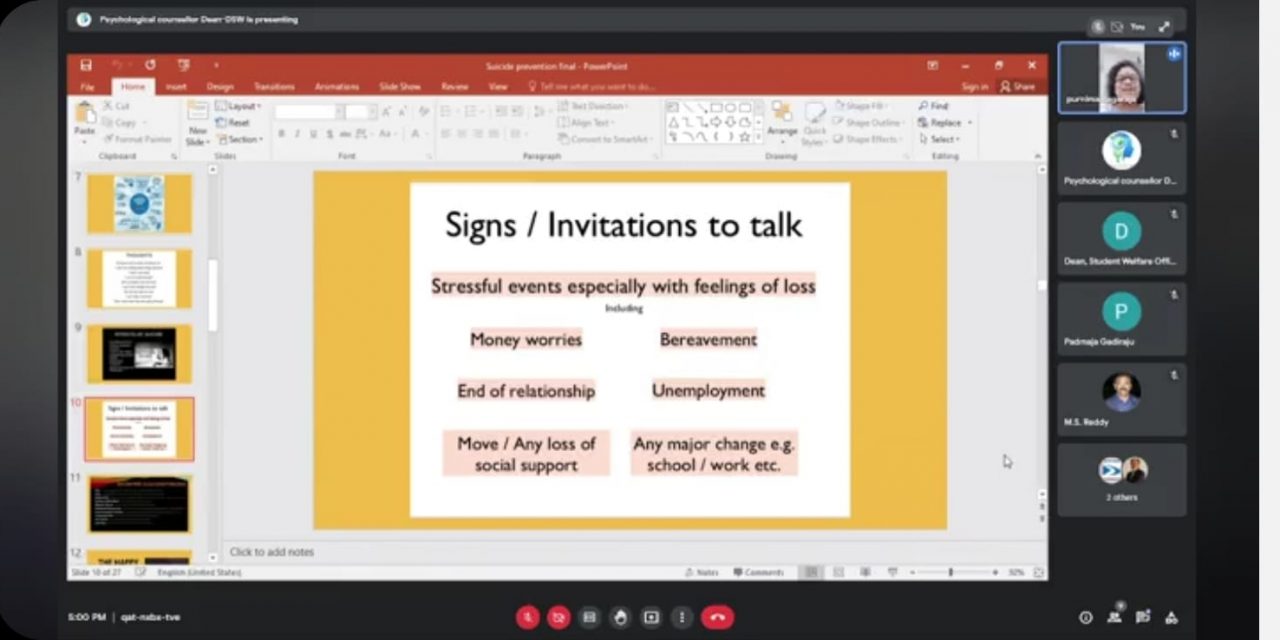 The Psychological Counselling Unit of the University of Hyderabad (UoH) under the Office of Dean Students’ Welfare organized an online Panel Discussion on the topic ‘CREATING HOPE’ under the ALAMBANA series. It was organized on September 14, 2021 on the occasion of the ‘Suicide Prevention Week’. The panelists included highly respected experts from the field os Psychiatry and Social service. The panel included Dr. MS Reddy – Director Asha Hospital, Dr. Purnima Nagaraja -Director of Dhrithi Wellness Clinic, Mr. Balaji Sundaram – Director Dharshini, NGO, and Mr. Isidore Philips – Director of Divya Disha NGO. They discussed different aspects and factors of suicide – why it happens, what we can do, and how to prevent it. The discussion was moderated by Dr. G Padmaja, Dy. Dean, Students’ Welfare along with Psychological counselors Dr B.Hymavathi and Mr B.Subhash.

The discussion started with an optimistic note by Dr. MS Reddy, Psychiatrist and Director Asha Hospital which ascertained the fact that depression is treatable. He explained how everyone contributes to a person’s mental health, and their actions can prevent depression. He emphasized the holistic picture where everyone has a role to play to help the person who feels hopeless. He also explained that, the suicidal thoughts are the symptoms of depression. Mr. Reddy deals with patients having Mood Disorder, Bipolar Disorder and Depression. He indicated the sad state where around 15% of patients with such disorders may end their life by suicide.

Taking it forward, Dr. Purnima Nagaraja, Director Dhrithi Wellness Clinic, Psychiatrist, assured that suicide is preventable. She emphasized on how to treat depression and what are the reasons for suicide. In her well-explained presentation, she covered the signs of suicidal thoughts, facts about the patients and about the various myths and facts of the problem. She then spoke about the use of anti-depressants and related therapies. She described the role of social support at different levels and the protective factors. She also indicated the importance of the role of social media as well.

After her, Mr. Isidore Philips, Director of NGO, Divya Disha talked about the awareness and stigma related to Depression and Suicide. He urged on the need for creating caring communities, and individuals in the society being messengers of hope. He pointed to the need for the students to become SPMs, ‘Suicide Prevention Messengers’. Because of the stigma attached to suicide and depression, people do not talk about it, but with the help of responsible members who care, the stigma of consulting a mental health professional could be overcome and suicides can be avoided.

The discussion ended with Mr. Balaji Sundaram, Director Dharshini, an NGO, speaking about seeking help and support thus preventing suicides and motivating the students about the greater meaning of life. Active listening from a helper itself helps to begin with, as it enables the scope for ventilation to the person in distress. Scope for sharing and availability of a person who helps by caring has been highlighted. With the help of a video, he explained the various phases a person passes through before reaching the suicide. The students posed several questions as a part of the discussion that followed, which were handled by all the four experts extensively.

Surveys indicate that every year, approximately 8 lakh people commit suicide in the world. In the last five years, 39,775 students have taken their life by committing suicide, because of varied pressures in India. It is necessary to talk about the mental health of people. University of Hyderabad already has two dedicated Psychological Counselors who are available online or by phone round the clock to the students and available for direct consultation during working hours in the Counseling unit of DSW’s Office. Approaching the Psychological counseling unit at an appropriate time will help in scope for effective interventions contributing to enhancement of wellness.

By creating a dialogue between students and experts as a part of the Alambana series, the University has taken one more step in its programmes for the students’ mental health. The online discussion was live-streamed, and the recorded video is on the Facebook page of the University.