The Tiger and the Tubewell: Malevolence in Rural India

The Sociology Department, University of Hyderabad organized a talk on the topic “The Tiger and the Tubewell: Malevolence in Rural India”, by Professor A R Vasavi.

Aninhalli R. Vasavi, a Senior Fellow at the Nehru Memorial Museum and Library, New Delhi has previously worked at the Indian Institute of Management, Ahmadabad and National Institute of Advanced Studies (NIAS), Bengaluru. She is known for making seminal contributions towards an environmentally-aware ethnographic perspective on agrarian economy and culture. Her research on primary education offers an insightful analysis of the cultural embeddedness of the school, the teacher and the child as simultaneously social and administrative entities. She has also contributed to the ethnography and political economy of the IT profession in India.

Professor Vasavi began with addressing the audience, “Well what I share with you today is a work still in progress, mapping what have been happening in much of rural India in the past two decades”.

In the past two decades Rural India has been subjected to Hyper Globalization, re-localization and Hyper Conservatism. On one hand these phenomenon have contributed to the positive wage increase, growth of new rural middle class, increment in forest area but along with that there is environmental degradation, declining water table, deepening of economic crises, suicides, abandonment of cultivated lands etc. Looking at this grim scenario created by globalization one often tend to overlook to the contribution made by the ‘Tiger and the Tube well’ in aggravating the situation.

This may sound confusing but to understand how these two great icons have disrupted rural societal, economic life we need to trace the journey of both of these. Save the Tiger project which was started in 1973, fostered this idea of exclusive conservatism that too of a particular fauna .This conservatism drive has lead to forceful evacuation of Adivasi’s, making them ecological refugees . Though there is no accurate data but during this drive around 3 lakh people have been displaced in the time period between 1973 – 2018 that too in undemocratic. Today Tigers having face book pages , state sponsored funeral .From TV channels running programs on ‘Save the tiger ’to us having Bollywood movies like ‘Ek tha tiger’ all these make the tiger occupy a space in the cultural life of people . In our country there is a moral commentary on what the tiger represent. This symbolism associated with the tiger justifies this type of Hyper conservatism.

While the social welfare department in the country is in poor condition, the forest officials are receiving plush funding to run exclusive resorts catering to foreign tourism. This conservative tourism have denied Adivasi’s the access to medicinal herbs, forest grounds. We need to question the entry of corporate in forest areas. Its observed that the ousting of tribal people have also lead to greater animal- animal conflict in forest region. This has disturbed the practices of cohabitation.
Two years back during the Sunderbans protests, people were heard saying, “Tigers are not the threat but forest department is ..”

Coming to tube well, they were promoted as a part of development agenda. They were employed in places where perennial water could not reach. Though it’s one of the most clandestine way to get water but around 20% of cultivated land in India relies on tube well water.

This tube well capitalism has induced competition between the farmers –how much deeper one can go not just in productivity. As a part of this we see credits are given to farmers for tube wells even when water table is low in that region. Tube well capitalism has rooted itself so deeply in our country that it has created a trend of dry agriculture. Across the country there is a distress led growth, suicides of the farmers also indicate the indebtedness due to tube well. Today a farmer is unable to picturize his life without a tube well. This idea of owning a tube well has been so pervasive that farmers no more wants to practice dry agriculture.

Quoting from her field visit she said somehow this tube well has acquired larger than life meaning. Like good output can only be assured if tube well is used .Also during match making people are keen to search families that own a tube well.

“To have a tubewell is to have a mustache”

Interestingly this tube well culture has also given way for erosion of sacrility. Before the advent of tube wells, times were such that people valued the water, wells were worshipped. Today people seem to forgetting the fact that water will be exhausted soon. According to WHO report Tube well affected by arsenic are a leading cause of health crisis. Also not to forget the infamous case of the 5 year old prince getting stuck in tube well .These crisis created by tube well has deeply transformed the societal structures.

She concluded the talk by remarking how these two great icons are playing malevolence in rural India.

Drawing the other side of story, the audience during the Q and A session reflected on the idea that “No matter what happens animals can’t protest for their rights, its only human who can protest. So let’s not forget the crucial role played by conservatives.”

The talk concluded and culminated in the form of discussion. R Thirunavakkarasu ,Associate Professor Department of Sociology gave the closing remark and thanked Professor Vasavi for visiting and talking about such an issue ,sparkling students interest in the same field. He urged students to look at the category of forest as an interesting topic for research .Giving vote of thanks he asked professor Vasavi to visit again.”

-By Zeenat Shana, Department of Communication.

National workshop on Ageing and Health 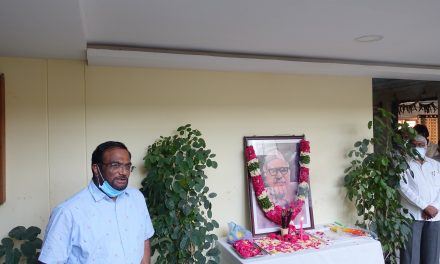