The Junior Science Club (JSC) is an organization run by science students of the College for Integrated Studies (CIS), at the University of Hyderabad (UoH) is organizing Vigyanotsav 2017 on February 11 & 18, 2017. It was established by Prof. K.P.N Murthy in 2006 and is affiliated to the Indian Physics Association, Hyderabad Chapter.

About the event: Vigyanotsav is an annual science fest conducted by JSC, with an aim to inculcate scientific temper among school students and encourage them to pursue various scientific careers in future.

The scientific earnestness was quite evident: bustling young students explored the magic of science through experimentation, competitions and lectures.

On February 11, 2017 hundreds of students from schools across the city gathered inside the CIS auditorium and were engrossed in exciting conversations and simultaneously watching scientific documentaries being played. It was soon followed by an inaugural speech by Prof. Sanjay Subodh, director of CIS. Whilst he motivated students, he also appreciated the club’s effort in organizing the event and gave a general crux of what to expect from Vigyanotsav.

The students were gripped by enthusiasm as they participated in competitions such as Science Quiz, Just-A-Minute (JAM) and Science Debate. The debate had two rounds: the participants had to take a stance on ‘Clinical Trials on Animals: Justified or Not’ and ‘The Creation of Dolly the Sheep: A Controversial Clone’. Post lunch, experimental demonstrations by volunteers and coordinators of JSC won the hearts of students. They were allowed to perform hands-on experiments like building simple spectrometers from cardboard boxes and CDs, measuring the lung capacity and working on paper chromatography of leaf extracts. The bicycle wheel experiment related to conservation of angular momentum was a hit among students. One student added, “The experiment with bicycle wheel was so good. It was as if we were driving a car.”

The math team passed on puzzle sheets containing mathematical words and asked students to unscramble them. The students cheered on as a banana was thrown into a liquid nitrogen container. “I was shocked to see a banana breaking into pieces after dipping it in liquid nitrogen,” said Vaishnavi, from Srikrishna Devaraya School. They were equally amazed to see how flubber was made using fevicol and borax.

The lecture on ‘Careers in Science’ by Dr. Syed Maqbool Ahmed, Principal Scientific Officer at Central Instrumentation Laboratory (CIL) influenced students to reconsider their career options. He urged students to question everything in order to know the answers. 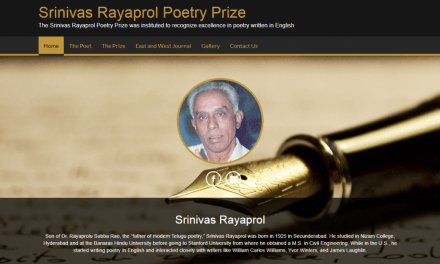 Srinivas Rayaprol Poetry Prize to be presented at HLF 2020