Towards an Inclusive Telangana

Sri. Kingshuk Nag, author of the well-known book titled, “Battleground Telangana: Chronicle of an Agitation” and also theResident Editor of the Times of India (Hyderabad Edition), delivered a special lecture titled “Towards an Inclusive Telangana” on March 05, 2014 (Wed) at the University of Hyderabad (UoH). Vice-Chancellor, Prof. Ramakrishna Ramaswamy chaired this lecture that was organized by the Centre for the Study of Social Exclusion and Inclusive Policy (CSSEIP).

In his lecture Sri. Nag stated that Andhra Pradesh was the first state to be formed on the basis of linguistic convention. Regions of erstwhile Hyderabad state under the Nizam’s rule and regions of Madras presidency with majority of Telugu speaking population was merged to create the new Andhra Pradesh state. People from both regions speak Telugu but culturally and historically they have been different.

After India got independence, a need was felt to properly organize the states as existing arrangements were not conducive for effective governance. The British were never interested in such organization as that was suitable for them. For non-Hindi speaking regions of the country, a linguistic based convention was taken into consideration for re-organising the states with the assumption that language is basis for culture and people with same culture can live together happily. Similar to Andhra Pradesh, the new Tamil Nadu state got major part of the Madras presidency and some from Andhra state consisting of Tamil speaking population.

Emergence of Telangana as the 29th state has given rise to breaking a state which was first to be formed on the basis of linguistic identity. In coming few years, we may witness greater demand for new states and some of them may even realize which is a welcome step for good governance and welfare of the citizenry, he added.

Further Sri. Nag shared that after 60 years of being a republic, India is now at a stage to realize a second form of republic. In today’s arena of collusion politics, role of regional players have been increasing and now people want new states to ensure their empowerment and political participation.

Talking about electoral reforms, Sri. Nag told that usually the winning candidates don’t get more than 30% of votes and this means that they don’t represent the rest 70% and hence in some way it’s a minority mandate only. Extrapolating the same at national level, we can see that ruling party doesn’t represent necessarily majority of the people. He gave examples of countries such as Australia, New Zealand etc. where procedures for election of representatives are better. However, it may take time for India to adopt such schemes due to high level of illiteracy, he added.

Further elaborating, Sri. Nag stated that Electoral reforms are very much necessary for people’s welfare. These days we’ve been talking about issues such as governance, corruption etc but, electoral reforms have not got proper attention. We should also ask why should there be only 543 seats in Lok Sabha (LS) and is this number really sufficient? Number of Lok Sabha seats have been determined based upon population. As a result, states that did well in terms of controlling population due to family planning, better education etc. got reduction in number of seats for their account and other states with higher population got increased number of seats. In 1971, the delimitation committee accepted to freeze number of LS seats till 2001. Again, in 2001 this freezing has been extended till 2031. However, this is causing other dimension of problem to good governance. Population has increased many folds and representative population ratio has gone down significantly. Electoral expenditure per constituency has been increasing and this has put good people at distance to take part in politics, he added.

Speaking on the creation of Telangana and its effect on Rest of AP, Sri. Nag observed that the main focus on Hyderabad will go down. Many new cities will emerge in the new Andhra state. Hyderabad as common capital for ten years doesn’t seem a working proposition and a new capital in the state of Andhra will emerge within 2-3 years.

Further elaborating on the creation of Telangana in the state, he told that Hyderabad will remain as hub for service industry and skill intensive jobs, while the manufacturing hub will be in costal Andhra. The city will not see any decline in investment. With institutions such as UoH, ISB, IIIT, IIT- Hyderabad, BITS Pilani etc., Telangana will have better set of educational institutions at least for next 10-15 years. Agriculture development, irrigation and power supply will remain major concern for the Government in Telangana. The feudal structure has to be checked here for better welfare of the people. It definitely takes time for transfer of power and empowerment of people from downtrodden strata and so, it would take time before we can see marginalized sections coming up the political ladder in the state, he added.

Sri. Kingshuk Nag also emphasized the need of having a Multicultural Commission with the CMs and representatives from civil society and communities to look into planning that can ensure peace and amity in the society. It’s necessary that people send good representatives and make sure that all sections of the society especially the marginalized ones get empowerment. Concluding his talk Sri Nag told that the state of Telangana has to make extra effort to make the dreams of its people succeed.

Research Scholar in the School of Economics 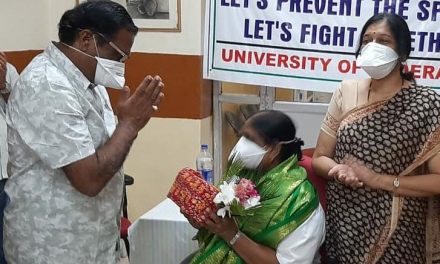